Well, actually you could drink these pink drinks at any time of the year, but I think they all look very summery and cooling for a stinking hot and humid day.

And yes, there are cocktails called The Pink Panther, the recipes vary, but girls should beware of all of them. 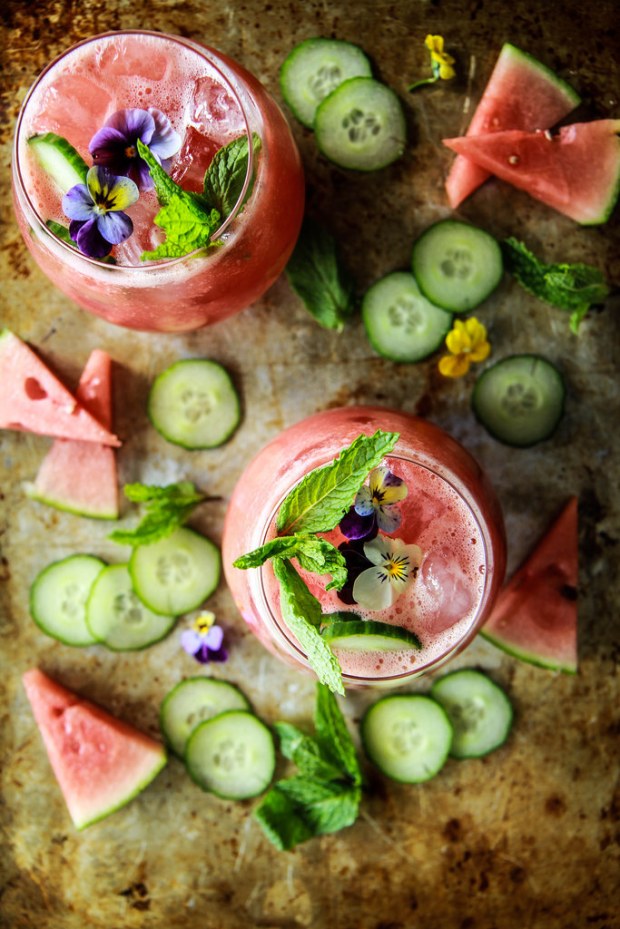 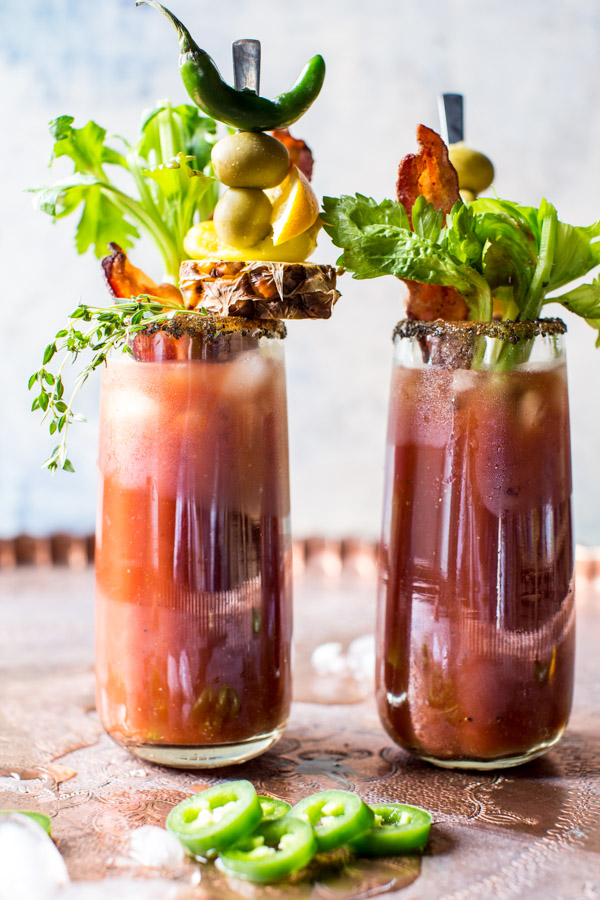 San Diego girl Averie Sunshine has a drink that’s sort of pink in this Malibu sunset, which is made with pineapple and orange juice, coconut rum, grenadine, with some added cherries.  Malibu Coconut Rum is a pretty cool spirit with lots of mixers; try it with Coca-Cola for a different tasting Cuba Libre. 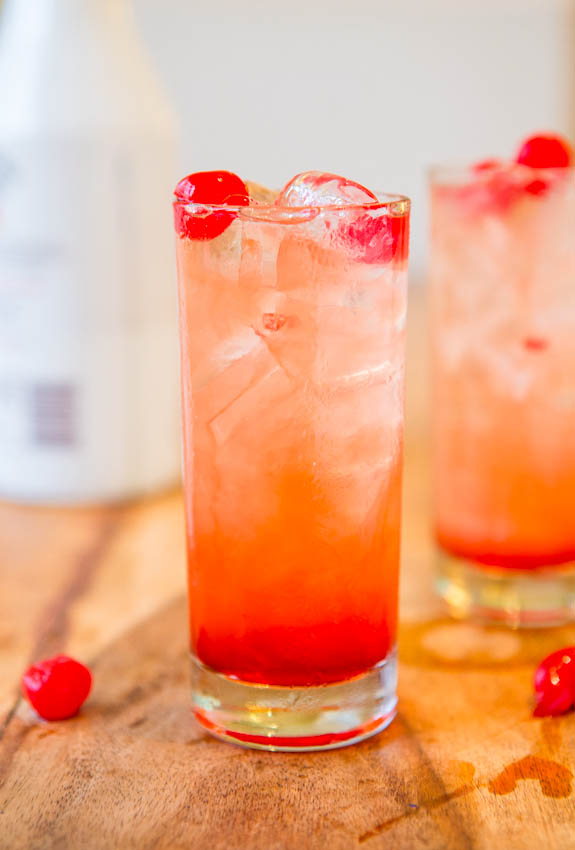 At Honestly Yum Todd has this cool and very pink watermelon, fresh herbs and sotol cocktail.  Sotol is from Mexico, it’s a bit like tequila, only crazier.

Seattle girl Heather, the Flourishing Foodie has this recipe for a rhubarb collins, and she also tells us how to make simple syrup ~ an essential ingredient for many, many long cocktails.

Chungah at Damn Delicious has this dead easy and very refreshing strawberry thyme prosecco ~ I love that Chungah uses limoncello in this recipe.  This drink is very pink indeed. 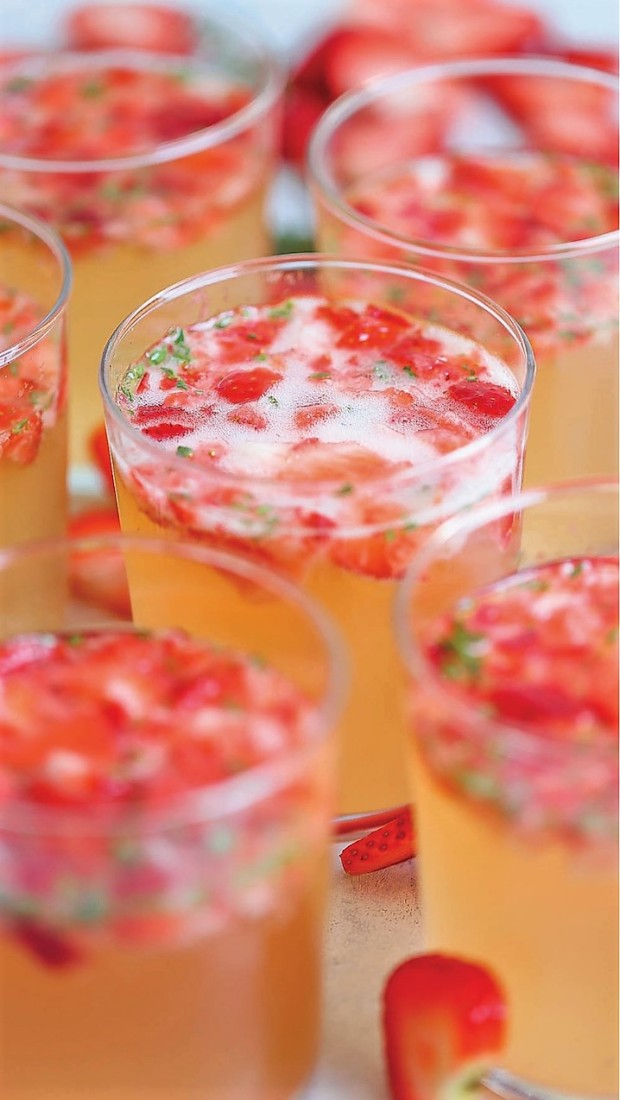 And finally for now, found in Allrecipes magazine, we have this recipe for Jewel’s watermelon margaritas created by Rainbow Jewels.  How cute. 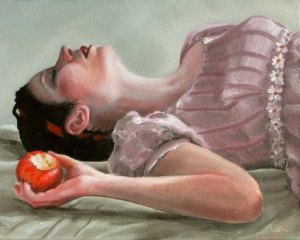 Death of the Real Land Rover

The Land Rover Defender 90 inch, doing what only it could do.

All good things must come to an end.  My Lightweight Land Rover was one of the best things I ever had.  Proper Land Rovers are fairly ugly, ( the Lightweight pictured is incredibly ugly), boxy, heavy, slow, uncomfortable, thirsty, rugged ~ a ‘proper’ Land Rover is one of the coolest cars a man can buy.  And, should you ever want to take off into the middle of a desert, on a dirt road, for a couple of weeks at a time, then there is no better car to choose than a ‘proper’ Land Rover.

The modern ‘proper’ Land Rover is called Defender, but before Land Rover went chichi and upmarket on us, all Land Rovers were rugged off-road vehicles equally suited to driving down Regent Street in London as they were to carrying troops across a battlefield.  The iconic Land Rover is said to be The Queen’s favourite car.

The very first Land Rovers were built, by the Rover Company, to replace the ubiquitous Jeep just after the end of WWII.  The whole design ethos can be traced back to those 2 simple facts.  It had to replace the Jeep and it was going to be British, and Britain was broken and destitute after WWII.  The Land Rover had to be a rugged, go-anywhere 4×4 workhorse.  Steel was in short supply in the UK so the body is aluminium, it had to use as many existing components as possible, looks and comfort didn’t much matter, and it had to be cheap.  The 1948 version cost £450. 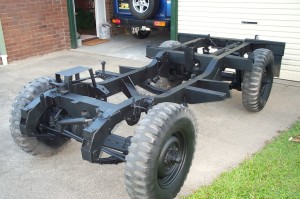 The simple solution found by Rover designer Maurice Wilks was to manufacture a strong box section chassis, and just hang everything else off that.  Just look at that chassis.  Rugged or what?  Over-engineered perhaps.  At the beginning all Land Rovers came in sage-green because a job-lot of surplus paint was acquired from a fighter aircraft factory.

Basically, once the basic steel frame has been welded together, everything else is bolted on.  Or pop-riveted.  Or screwed.  Or banged in with a hammer.  For English boys of a certain age if I say that a Land Rover is just a man-sized Meccano, they will know exactly how it was built.  (USA Erector Set)  As the blurb for the Erector Set says the ability to build a model, then take it apart and build something else, over and over again.  And, do you know what?  You can do the same thing with a full-sized Land Rover.

If your Land Rover is falling apart, you can take it completely apart, down to the last nut and bolt, and then build it again, but perhaps differently, and better.  Choose cart springs or coil?  Part-time or full-time four-wheel drive?  Pick any engine you like, and as far as the body is concerned, the choice is too wide to mention.  The most extreme Land Rover bodywork is the 101 Forward Control, which makes a fantastic camper / RV.  This thing was mostly used as a military ambulance or command car.

This flexibility and rebuild-ability means that the Land Rover is the greenest car ever built, dust to dust.  More than 80% of all the ‘proper’ Land Rovers ever built since 1948 are still in use~ they don’t get thrown away, they get recycled.  Which should have pleased the environmental nutcases is California, but didn’t.  Perhaps they didn’t like its military connections.

Since the first Land Rover was built in 1948 some 200,000 have been bought for military use, and like all Land Rovers have appeared in a bewildering range of variants.  As well as the 101 there were tracked, amphibious, fire engines…  The most famous variant being the Pink Panthers used by the SAS, (Special Air Service), the UK’s and World’s premier special service force.  The pink colour is desert camouflage.  You would understand that if you’d ever been into the desert. 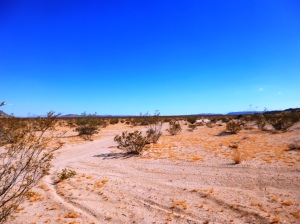 However, there are a few problems having a real Land Rover as your only car.  For example; they are illegal in the USA, they are slowish and use a lot of fuel, comfort isn’t what they are built for, they are tall and a long way off the ground, the heating system is pathetic….  But, as I said, if you really want to drive off into the desert, this is your vehicle of choice, at least you will stand some chance of returning.

There is an all new Land Rover Defender coming off the stocks.  But the new Land Rover Defender isn’t even going to be built at its traditional home, in Solihull, in Britain.  A new factory in Slovakia, (Slovakia? Did anything good ever come from that part of the world), will build the chichi new Defender DC100, which looks like a bigger version of BMW’s Mini that’s been frightened by a plastic bath-tub.  More suitable for the supermarket car park than the Sahara Desert.

Good Grief!  But money talks.  Land Rover will be able to sell this toy car in the USA.  They are just dumb enough to buy it if it’s cheap.

I have owned a couple of Land Rovers, including a Lightweight, and the kid’s toy look of the new DC100 just doesn’t cut it.  It’s a girl’s car, or maybe a hairdresser’s, at least a metrosexual guy who worries about his manicure more than his car.

Don’t worry, get a tool kit and build your own ‘proper’ Land Rover.  All you need is a hammer ~ well maybe.  It’s the tool of choice in Slovakia.

most photographs from google