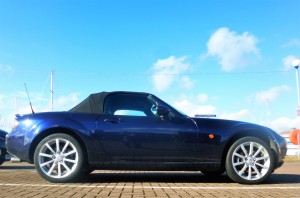 At a time when mainstream British car manufacturers thought it impossible to go on making small convertible sports cars, Mazda from Japan came up with the M-X5.  The little Mazda carried the torch first lit by classic English sports cars like the Austin-Healey Sprite, MGB, Triumph Spitfire ~ and in particular the brilliant Lotus Elan.  The original Mazda M-X5 could almost have been copied from the Elan, what with its 1.6 litre twin-cam engine, pop-up headlights, and clever longitudinal truss, (Power Plant Frame), that mimics the Elan’s backbone chassis.

The MX-5 wasn’t designed in Japan either ~ it was planned in California by a team led by Englishman Bob Hall.  An Englishman in California is just about the perfect combination when it comes to cars.  Of course what the Mazda team didn’t copy from Colin Chapman’s Lotus was fragility, unreliability, and extreme lightness.

First launched at the 1989 Chicago Auto Show, the M-X5 was and is a fairly small front-engine, rear-wheel-drive roadster, with a twin-cam engine of between 1.6 and 2.0 litres.  There’s a five-speed gearbox in the middle, double wishbone independent suspension at both ends, and disk brakes, (ventilated at the front).  The original model weighed in at almost exactly ton, (which is a portly 600 pounds more than the diminutive Lotus).  It even looked like a Lotus Elan ~ which was no bad thing.

As well as the looks and layout, what the original design team got right was balance.  The unladen M-X5 has an ideal 50/50 weight distribution, which means that the handling ~ the feel of the car when you drive it ~ is just about perfect.  This makes the little Mazda a ‘nice’ and ‘fun’ car to own and drive.

The M-X5 is by no means a fast car.  The 1989 original came with just about the same power as a Lotus Elan, but it weighed a third more, so it was a tad sluggish.  The traffic-light sprint 0-60 mph time was over 8 seconds and it would run out of steam at about 115 mph.  But do you know what?  With the top down, on country roads, with the brilliant handling and roadholding the design naturally produces, the original M-X5 was more than fast enough.

Among older English car enthusiasts the word to describe the way an M-X5 drives is ‘chuckable’.  (It reacts easily, safely, and can be forced into doing things it really shouldn’t ~ it probably won’t kill you.)

The little Mazda is also a great car for a long road trip.  It’s a nice place to sit for hours, rides fairly comfortably and quietly, there’s decent luggage space, it’s economical, and the top comes down.  What’s not to like?

If you are mechanically minded with some practical skills, you could buy yourself an early M-X5 for a couple of thousand pounds / dollars.  The thing is simple enough to allow a complete rebuild, in the same way that one could rebuild an MGB.  But why would you bother?  The Mazda M-X5 is a classic design, but it isn’t actually rare, (unless it’s a really early car in light blue mica or British Racing Green), and a newer car needing much less work is within the spending reach of just about everyone.

A new M-X5 will set you back around £20,000, (or $30,000), depending on the exact specification.  For that you will get a very capable, very over-engineered, and very over-styled car that is so attractively modern-metrosexual it should only be bought by make-up artists, hairdressers, or real estate agents.

At the upper end of the scale a new M-X5, the fastback with a retractable steel roof will cost you about £28,000, (you can get one of these for $35,000 in California).  That would also give you a 160 bhp two-litre engine and six-speed gearbox, all in an overstyled package that weighs in at 2,470 pounds ~ no thanks.

The new M-X5 is so far away from its Lotus Elan spiritual inspiration that it’s not even in the same millennium.  I would not waste my money on a new M-X5.  If I was really in the market for one of these little Japanese / English / Californian sports cars I would look for an early example, pop-up headlights and everything.  In comparison to rebuilding a rotted MGB, working on a Mazda would be child’s play.  The three critical areas for structural soundness are the Power Plant Frame and the front and rear subframes, and all three can be replaced.

Some cars are obvious Guy, some Girl, and a few go both ways.  Why is the Mazda a Girl’s Car?  If you have to ask then you’re either a girl, or a metrosexual male who doesn’t know one end of a torque-wrench from the other.  You wouldn’t expect to spoil your manicure if you owned a new Mazda M-X5.

Would I buy one?  Yes, so long as it does look like a Lotus Elan. 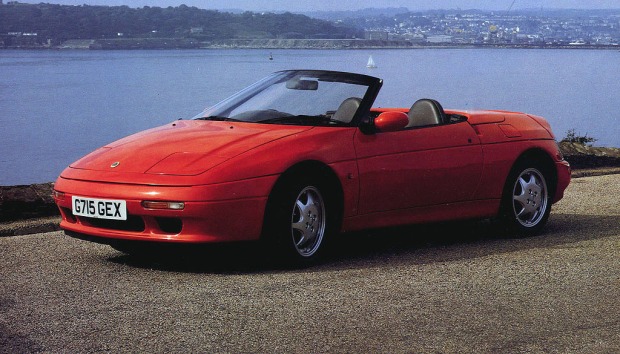 The first thing you need to know about the M100 series Lotus Elan is that it’s front-wheel drive.  Front wheel drive is an anathema to sports car enthusiasts.  The engine in this Elan came out an Isuzu van, and the whole project was financed by General Motors.  Front wheel drive isn’t ideal in a very fast car ~ torque steer, bump steer, lift-off oversteer, steering kickback, lack of traction….  to name a few problems.

Real drivers will tell you that the M100 Lotus Elan remains the best driving front-wheel drive car ever made, bar none.

Almost all the 1,588 cc dohc 16 valve engines were turobcharged.  Power from the turbocharged engine comes in at a very healthy 165 bhp, and 148 ft/lbs of torque, driving through a 5 speed gearbox, and this little car weighs just about a tonne, (1,020 kilos).  Flat out this Elan should almost touch 140 mph.

Like almost all Lotus, it’s a pretty fibreglass body over a steel backbone chassis, but this time there’s a clever ‘floating’ subframe to carry the engine, gearbox, and front suspension.

It’s cool, and it’s cute, and it’s fairly practical, which makes it a great girl’s car.  It’s also quirky, clever in engineering terms, and it’s bloody fast, which means that a real man would look good owning one of these things.  Even though it’s a bit metrosexual the M100 Elan qualifies as a very cool car.  Also, unlike many Lotus products, you don’t have to be a contortionist to get in and out of this Elan.

If you can find one, you can buy a decent M100 Elan for £ 5,000.  But beware, it’s a Lotus, so it will go wrong and bits will fall off.  And, if the backbone chassis is rusted or damanged, expect a lot of heartache and expense.

Any car which holds together for more than a race is too heavy.  ~  Colin Chapman

But, and here’s the thing, the M100 was supposed to be a high-volume product, and GM / Lotus spent about $100 million developing this little Elan.  This is a strong, tough, well thought out, sexy little car.  Would I own one?  Would I use this Elan for a transcontinental road trip?  In a New York Second I would. 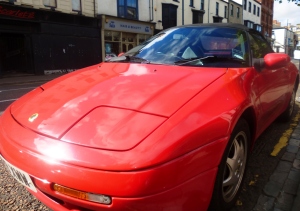 Seen at a local car rally, one of my Top 10 cars of all time.  A very bright green example of the beautiful, dynamic, elegant, fragile, and inherently flawed Lotus Elan Plus 2.  This agile, fast, desirable little sports coupé is capable of breaking a man’s heart almost as badly as would falling hopelessly in love with the wrong woman.

Based on the equally desirable, but even smaller Elan, the plus 2 had a longer wheelbase, was a little wider and heavier, but came with two rear seats big enough for a briefcase / ladies purse, or small children. 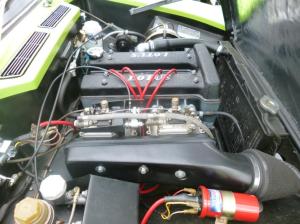 The Plus 2 followed the basic Lotus layout of a backbone chassis, Lotus-Ford Twin Cam engine, mated to a Ford gearbox, putting the power down though Lotus’ idiosyncratic independent rear suspension, with brilliant independent front suspension and lightning fast steering, all clothed in a pretty closed coupé fibreglass body shell.

Any Lotus, from any era, should be a dynamically brilliant, blisteringly fast car, (on anything other than the freeway / motorway / autobahn, where its flaws will be most obvious), capable of putting a silly smile on your face every single time you drive it.  The secrets are a stiff chassis, compliant suspension, low weight, small size, fast steering, brilliant roadholding, and enough power.  Very simple really. 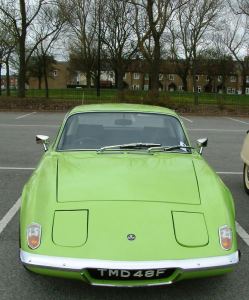 The philosophy of Lotus follows that set by the genius Colin Chapman, and that philosophy is in every nut and bolt of the Elan +2.  This mantra of simplicity and lightness is what results in both the Elan’s brilliance and it’s flaws.  Lotus would never make one component do only one job on the car, not if they could make the same component do two or three different jobs.  To give you an example; on the Elan, the concealed headlamps are raised and lowered by a vacuum system that uses a front chassis cross member as the reservoir…  Clever, but crazy.  This philosophy of being as light as possible and then lighter than that, resulted in some spectacular fragility in Lotus Formula 1 cars.

In the Elan +2 this obsession with lightness and simplicity will result in breakages and breakdowns, on a depressingly regular basis.  I would caution anyone who is not either mechanically adept, or rich, (or insane), not to buy one of these heartbreakingly wonderful little cars. 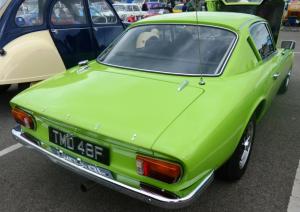 Some say that LOTUS stands for;

Personally, given the time and money, I could rebuild an Elan +2 from the badge backwards.  Come to that, new backbone chassis and body shells are available, so I could build myself a brand new Elan plus 2, from the garage floor upwards.  Budget for that?  Using some reconditioned components, start at $20,000 and work towards double that, (not counting my time).  The benefit of building my own ‘Lotus’ would be I could re-engineer the basic car using more durable modern components ~ such as the Ford Zetec engine.

Would I buy, rebuild, or build an Elan plus 2, this infinitely desirable, dynamically wonderful little car.  The short answer is no.  The long answer is, no I still wouldn’t, and that’s broken my heart already.  If I really wanted a fast classic coupé, I’d look for the far more agricultural, but still pretty,  Reliant Scimitar GTE.  Whereas a decent Elan +2 would cost me £15,000, I could most likely get a decent Reliant Scimitar for around £5,000.  Of the two, which do you think would break first?