wandering through a desolate wasteland of your own making

I guess I have suffered from untreated Borderline Personality Disorder, (BPD), for most of my life.  I shouldn’t feel so bad because BPD is mostly incurable, and all many of we sufferers can do is learn how to minimise how the symptoms and traits that blight our lives.

As far as possible treatments go…..

Medication is usually neither effective nor recommended for sufferers of Borderline Personality Disorder.

Many suffers of this terrible illness self-medicate with copious quantities of alcohol, marijuana, and other street drugs ~ and then they become addicts.  I’ve tried the booze thing, over and over again, just to escape the pain and suffering.  It works for a while, because a boozer will eventually just pass out.  However, the cure soon becomes worse than the disease.  Too much booze can kill you in so very many ways, and anyone suffering from Borderline Personality Disorder will always drink far too much strong liquor.  Eventually one has to stop drinking for a while, and for a while after you stop drinking you might feel so physically ill that you believe you are going to die.

If you are in crisis your doctor might give you a sleeping pill or tranquilizer, but should not ever prescribe more than a week’s supply ~ there is too much danger that someone suffering from BPD will take an overdose, possibly in an attempt to kill themselves.

Your doctor may prescribe Prozac, (fluoxetine), which is an SSRI, (selective serotonin reuptake inhibitor), an antidepressant used to safely treat depression, anxiety, OCD, (obsessive compulsive disorder), maybe Bipolar Disorder, and eating disorders.  Prozac makes you want to commit suicide.  When you stop taking Prozac you will have some unpleasant withdrawal symptoms.

In a tiny study, (of 12 patients suffering from BPD), all showed some improvement after taking Prozac over an extended period, but none in the trial had suffered from terrible depression.  Nowhere is Prozac said to be an effective treatment for Borderline Personality Disorder.

Of the talking therapies, current thinking is that Dialectical Behavior Therapy, (DBT), is most effective at treating BPD.  The thing about DBT is that it focuses on honestly accepting who we are, and that is the real key to living a good life if you have Borderline Personality Disorder.

Personally, I have found a great deal of benefit just watching and listening appropriate podcasts on internet sites like YouTube.  What I have learned is that no matter how fucking chaotic, evil, and negative my feelings are, I DO NOT NEED TO LET MY NEGATIVE FEELINGS AFFECT MY BEHAVIOUR.

Some say that they never realised that they were acting like a jerk, or a bitch.  And that they thought that everyone had distressing feelings all the time.  All I know is that I can be a cool guy, living a really great life ~ even though I have an incurable personality disorder. 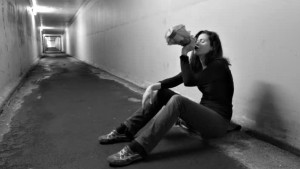