there is no such thing as bad weather, only different kinds of good weather

As far as I’m concerned the weather here is bad today ~ gale force winds and driving rain, courtesy of an Atlantic storm sweeping in from the south-south-west.  Some fool decided that severe storms here should have names, and this one is called Erik ~ pathetic.  Hurricanes should have names, minor storms over the British Isles shouldn’t.  (Actually it’s Met Éireann, the Irish Meteorological Office which names storms here ~pathetic.)

For all of history, today, and into the foreseeable future mankind’s activities have been /are / will be dependent upon the weather.  Agriculture relies on the right kind of weather at the right time, travel can be disrupted due to high winds rain, and snow, and power consumption rises if the weather is too hot or too cold.

Right now 70 million Americans across the Midwest are bracing themselves for dangerous storms bringing high winds, cold, rain, hail, and the possibility of a tornado or two.  Now that’s really bad weather.  But then America does have extremes of climate.

Weather refers to what’s going on in the atmosphere at a particular place, over a short period of time; temperature, humidity, wind, rain / snow, clouds, visibility…..  Climate is the long-term weather pattern over a large area over many, many years ~ long enough to generate meaningful statistical data ~ say a hundred years or more.

Which is why all this brouhaha over catastrophic anthropogenic climate change is just so much crap.  If global temperatures show a significant warming over the next 30 years or so, then maybe there may be something to it ~ or more likely it’s still just changes in long-term weather patterns driven by the usual suspects.

Our weather is created by the sun, and sometimes catastrophically modified by rare events such as a very major volcanic eruption, (Krakatoa), or a comet / meteorite hitting the surface of the earth, (whatever killed off the dinosaurs).  Occasionally local weather can be catastrophically changed by the actions of man; the Great London Smogs for example, but those events are rare and temporary.

Some say that man is killing the planet.  And that we need to stop using cars, aeroplanes, electricity, living in houses, and definitely stop eating meat.  All I know is that every now and again Chicken Little runs around screaming that the sky is falling. 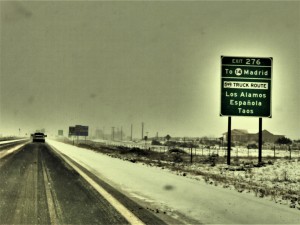 snow on the high plains isn’t so very rare