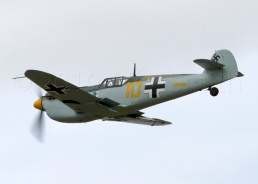 The Hurricane was in the thick of the action well before the Battle ofBritain as part of the British Air Forces in France, with 6 Hurricane squadrons from January 1940.  A further 4 Hurricane squadrons were sent to France when the German offensive began, followed by another 2 on May 13th 1940.  The French Air Force, (Armee de l’Air), was so ineffective in 1940 that on May 14th the French Government then asked for another 10 squadrons of Hurricanes ~ after much heart-searching only 3 more Hurricane squadrons were committed, and these returned to England at night.  In the end, by the time of the Miracle of Dunkirk, over 200 Hurricanes had been lost, many of which would have been repairable had they not been operating from forward air bases in France.  England committed a greater proportion of its air strength to the Battle for France, than the French did, 30% as against 25%, and at such a cost that the Battle of Britain was a damn close run thing.  (The 1969 film: Battle of Britain gives a reasonably accurate account of the battle.  However the Bf 109’s in the film are powered by Rolls-Royce Merlin engines.(Hispano Aviacion Bf109 Bouchon)).

In any form, the Bf109 outperformed the Hurricane except in tight turns at low altitude.

Designed by Sydney Camm and entering service in 1937, the Hurricane was the first of the RAF’s monoplane fighters, and became the first operational RAF aeroplane capable of exceeding 300 miles per hour.   It used the same legendary Rolls-Royce Merlin engine as the Spitfire, which at the time of the Battle of Britain produced 1030 brake horse power.  Eventually the Hurricane would be fitted with the two-stage supercharged Merlin 27 which gave 1635 bhp.  These engines were mounted in a fuselage which had a lot in common with earlier, biplane fighters.  There was an alloy frame to which were mounted wooden stringers and then covered in fabric.  Only the area around the engine had an alloy skin.  Early Hurricanes even had outer wings covered in doped fabric.  Unlike the beautiful, elliptical, wing of the Spitfire, the Hurricane’s wings were simple in design and construction.  This rugged construction was the logical outcome of a long line of Hawker fighting aircraft.

The thing about the Hurricane’s simple wing was that all the guns could be grouped close together, outside of the propeller arc, and heavier armament could be fitted than the Spitfire’s thin, elliptical, wings could accommodate.  The Hurricane was the world’s first 8 gun monoplane fighter, at the time of the Battle of Britain most Hurricane’s were fitted with 8 Colt-Browning 303 machine guns.  Later Hurricanes could be fitted with 12 machine guns, or 4 20mm cannon, or even with twin Vickers 40mm S cannon and 2 machine guns for use as tank-busters.

Some 1,715 Hurricanes took part in the Battle of Britain, (29 squadrons as against 19 Spitfire squadrons), and between them its pilots destroyed 80% of the Luftwaffe aircraft shot down between July and October 1940.  Sadly, inexperienced Spitfire pilots were known to have mistaken Hurricanes for the Bf 109 and attacked their brother RAF aircraft.  The usual tactic for a mixed formation of Hurricanes and Spitfires was for the Hurricanes to stay lower down and attack the bombers, while the Spitfires flew top cover and tackled the enemy fighters.  Obviously the bombers were the easier target.  However, it is fair to say that this reliable aeroplane has never been given all the credit it deserved for winning the Battle of Britain.  Older and slower than the Spitfire it may have been, but there were more of them.  (Hurricane: Victor Of The Battle Of Britain by Leo McKinstry.) 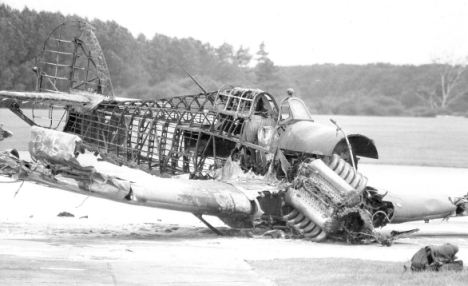 The Hurricane was a remarkably versatile aircraft.  At a pinch it could be flown as a night-fighter as the wide-track undercarriage made it possible to land a Hurricane in the dark.  From 1942 the cannon-armed IIc operated as a night intruder over occupied Europe.  In the North African desert, tropicalised Hurribombers armed with 4 20mm cannon and 500 lbs of bombs, gave the axis a taste of what to expect from Hawker fighter-bombers.  The Hurricane was supplied to Russia under Lend-Lease, although the 2,952 aircraft delivered weren’t much liked by soviet pilots.  The Sea Hurricane became operational from 1941 and stayed in service for 3 years.

Perhaps the most dangerous, (for the pilot), variant of the aircraft was the Hurricat.  Because of a shortage of aircraft carriers for convoy escort work, some merchant ships were fitted with a rocket-propelled catapult to launch a single Hurricane fighter.  Amazingly, pilots were found for the Hurricanes fitted to these CAM ships.  If all went well, the Hurricane would shoot down the German reconnaissance aircraft shadowing the convoy, and then the pilot would bail out, or ditch in the sea, to be picked-up by the convoy escort.

CAM ship with Hurricane on the catapult

This unpretty fighter was in the right place at the right time.  Early Hurricanes had a wooden, two-bladed, propeller and no armour plating.  But even when these shortcomings were rectified, the aircraft had a limited development potential because of its frame and fabric fuselage.  Hawker’s next fighter, the Typhoon, employed a structure that was a mixture of a monocoque and steel frame skinned in alloy.  The monocoque tail structure of the Typhoon had a nasty habit of falling off in the earlier marques.

The real story is that, without the Hawker Hurricane Britain could have lost the war.